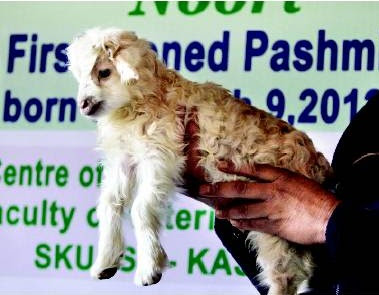 In a first in the world, scientists at the Sher-e-Kashmir University of Agricultural Sciences and Technology in Kashmir have successfully cloned a rare Himalayan Pashmina goat, hoping to help increase the number of animals famed for Pashmina wool, or cashmere. Named Noori, the animal was born on March 9 and is doing well so far, said Doctor Riaz Ahmad Shah, who heads the cloning project at SKUAST. Pashmina goats, which grow a thick warm fleece, survive on grass in Ladakh where temperatures plunge to as low as minus 20 degrees Celsius. Experts say their numbers are dwindling. In recent years, Kashmir has started importing cashmere from neighbouring China to keep up with orders for the region’s hand-woven shawls. Shah and six other scientists took two years to clone Noori, using the relatively new ‘handmade’ cloning technique involving only a microscope and a steady hand. “We’ve standardized the procedure. Now it will take us half a year to produce another,” said Dr Maajid Hassan, who worked on the project, partly funded by the World Bank.