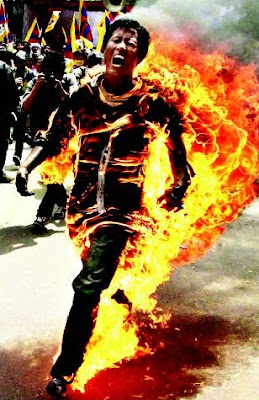 Tibetan activist, Jamyang Yeshi (26), runs through the crowd after setting himself ablaze at Jantar Mantar in New Delhi on Monday, during a demonstration against Chinese president Hu Jintao’s visit later this week. Sources said Yeshi ran nearly 50 yards before collapsing and protesters doused the flames with Tibetan flags. He suffered 90% burn injuries and is in a critical condition at the Ram Manohar Lohia hospital. He had escaped from Tibet in 2006 and had been living in the city for the past six years, activists said. Jintao is arriving in Delhi on Thursday to attend a summit of Brics nations. In Dharamsala, the Central Tibetan Administration (CTA) said the Dalai Lama is “neither encouraging self-immolations in Tibet nor advocating expulsion of Han Chinese from Tibet”. The CTA said 17 people have reportedly killed themselves this year in Tibet for the cause. Some incidents of immolation have been reported from Andhra Pradesh too for the creation of Telangana.