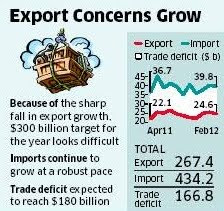 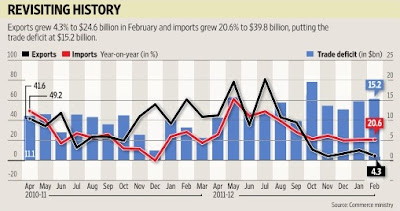 India's trade deficit may revert to the level it was in the financial crisis year of 2008-09 as a percentage of the gross domestic product (GDP), with merchandise imports continuing to register robust growth while export expansion remains in single digits.
Exports grew 4.3% to $24.6 billion in February and imports grew 20.6% to $39.8 billion, putting the trade deficit at $15.2 billion. It stood at $166.8 billion for this fiscal up to February, commerce secretary Rahul Khullar said while releasing the provisional trade numbers for February.
Given the rising monthly trade deficit numbers, Khullar raised the trade deficit projection for the full fiscal to $175-180 billion from an earlier estimate of $160 billion. Exports may just fall short of this year's target of $300 billion, he said.
“Roughly speaking, exports through the year should be in the neighbourhood of $292-298 billion,“ he said. “Imports will be about $480 billion and we are looking at a trade deficit in the order of $175-180 billion,“ Khullar said.
That would take it up to 9.6% of GDP, close to the 9.7% level in 2008-09. In 2010-11, the deficit was 7.5% of GDP.
In the April-February period, exports grew 21.4% to $267.4 billion while imports expanded 29.4% to $434.2 billion.
The high trade deficit is expected to take the current account deficit, or CAD, to around $66.8 billion, or 3.6% of GDP this fiscal, the Prime Minister's Economic Advisory Council said in its review of the economy released last month. The council said CAD should ideally remain 2-2.5% of GDP so that capital inflows can be readily tapped.
“Once it begins to exceed that level, investors tend to be concerned and are reluctant to commit risk capital. In consequence, the funding of higher CAD is not only harder but the quality of financing can also become an issue. This is even truer in current global conditions where risk perceptions are elevated,“ it added.
While exports of items such as engineering, petroleum products, gems and jewellery continued to perform well during the first 11 months, imports were driven mostly by petroleum products, gold and silver, machinery, electronics and coal.
Khullar said the high import bill is essentially due to rising commodity prices.“We have to import coal, fertilizer and vegetable oil,“ he said. “It's a double whammy... you are paying higher prices for these things. These are essentially demand constraints compelling us to import these goods.“
While weaker demand for merchandise exports, along with inelastic oil and gold imports, may further widen the trade deficit, CAD may, in addition, be prone to risks emanating from moderation in receipts on account of software exports, business services and investment income, the Reserve Bank of India said in its quarterly macroeconomic and monetary developments report released last month.
Exports may fall short of the $300 billion target to $290 billion, registering a growth of 20%, said M. Rafeeque Ahmed, president of the Federation of Indian Export Organisations lobby group.
Growing protectionism will further erode global trade, which is expected to grow 4% in 2012 against over 14% in 2010, he said.