A financial hub in the east 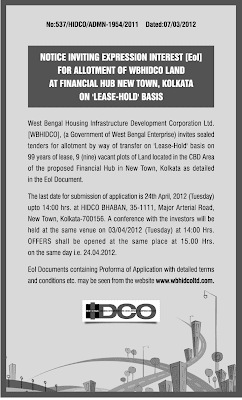 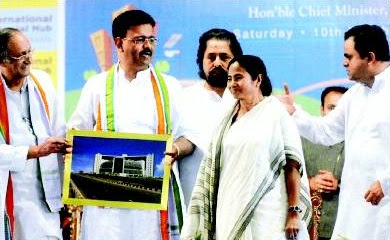 West Bengal Chief minister Mamata Banerjee laid the foundation stone of the international financial hub in New Town, Rajarhat, on Saturday. Once fully operational, the facility will connect to other financial hubs at London, Singapore and Dubai, state finance minister Amit Mitra said. Incidentally, this is the second time that a financial hub has been proposed. In October 2010, Union finance minister Pranab Mukherjee had laid the foundation stone for the project in the presence of then chief minister Buddhadeb Bhattacharjee. Within months, Hidco had announced plots for State Bank of India, UCO Bank, United Bank of India, UTI Mutual Fund and Industrial Financial Corporation of India (IFCI). But the entire project was dropped when the new government was sworn in. “The earlier financial hub led by a private promoter was scrapped. This is a new project and has nothing to do with the earlier one,” an official of Housing Infrastructure Development Corporation Ltd (HIDCO) insisted. Hidco is the project’s implementing agency. Pointing to the hub’s strategic location, given its proximity to both the airport and the IT hub at Salt Lake Sector V, Mamata said the facility comprising financial institutions, bourses and insurance companies would generate employment for around 2 lakh professionals when completed. The CM said New Town had the potential to attract investments of over Rs 1,60,000 crore in residential and commercial projects. To reach out to the business community, the chief minister assured that they would receive all possible support from the state. “We will not interfere in your business,” she added. “The hub will cover 100 acre. In the first phase though, the development will be spread over 25 acre,” said Hidco chairman-cum-managing director Debashis Sen. Apart from the financial hub, the remaining 300 acre of the central business district will comprise corporate offices. “We have floated expressions of interest (EOI) for the financial hub. The last date of application is April 24. Only big financial houses with annual turnover in excess of Rs 500 crore are invited to set up offices here,” Sen clarified. Hidco has already allotted plots to two major public sector banks—Allahabad Bank and State Bank of India. The Calcutta Stock Exchange has also received a plot to set up a facility at the hub. If the financial hub does come up as projected, it will become the second such facility in the country after Bandra Kurla in Mumbai.