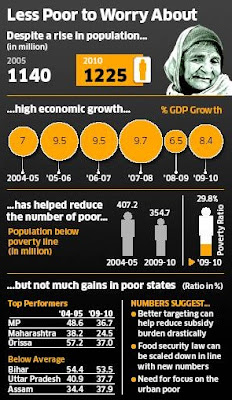 That Bihar under Nitish Kumar grew at over 10% between 2004-05 and 2009-10 is now wellknown. But data released on Monday shows that in the same period, the number of poor in the state actually grew. During this five-year period, Bihar added 50 lakh people to the number of its poor, by far the largest number of any Indian state in this period. A look at Planning Commission numbers for 2009-10 and 2004-05 shows that poverty has declined at a negligible rate in Bihar, so much so that the absolute number of people living in poverty has actually increased. In 2009-10, 54.4% of Bihar was under the poverty line as compared to 53.5% in 2004-5. This period coincides almost precisely with Nitish Kumar’s first term as chief minister, raising a big question mark over the real impact of his administration and the high growth the state has seen on the lives of the common Bihari. “Reduction of poverty is brought about by agricultural transformation, but Bihar’s growth was construction-centric,” says Shaibal Gupta, social scientist and founder-member secretary of the Patna-based think-tank, the Asian Development Research Institute. “Construction-based growth does not address the problems of poverty in a constructive manner,” he added. However, Gupta, who has worked closely with the Nitish administration, is positive. “The government is in the process of chalking out a techno-managerial strategy to bring about a new green revolution,” the social scientist said. Bihar is one of three states — Chhattisgarh and Uttar Pradesh being the other two — in which poverty has declined, but so slowly that the absolute number of people living in poverty has actually increased in the five years. Bihar and Uttar Pradesh have between them 128 million poor people, over a third of all of India’s poor, and roughly a tenth of the world’s poor. In five other states, the proportion of poor as well as the absolute number has risen. These are Delhi, Manipur, Meghalaya, Mizoram and Nagaland, with Nagaland’s performance being by far the worst; the proportion of people living below the poverty line has more than doubled over five years in this tiny state, going from 8.8% in 2004-5 to 20.9% in 2009-10.