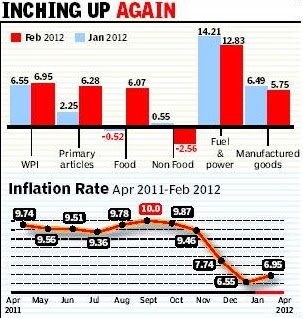 Inflation accelerated for the first time in five months in February on the back of an increase in food prices prompting analysts to say that RBI may delay any aggressive easing of interest rates for now. The data released by the commerce and industry ministry on Wednesday showed inflation, as measured by the wholesale price index (WPI), rose 6.95% in February from 6.55% in January. In February, 2011, it had stood at 9.54%. A sharp increase in food inflation was one of the key drivers. Food inflation rose 6.07% from a decline of 0.52% in January due to stubborn prices of vegetables and protein-based items. But there was some relief on the manufactured products inflation that moderated in February compared to the rising trend in the past few months. FM Pranab Mukherjee said easing of manufactured products inflation was good sign and hoped that overall inflation will settle around 6.5% by March-end. The government also revised upwards the December data to 7.74% as compared to the previously reported 7.47%. Experts said Wednesday’s data posed a dilemma for the RBI. The central bank has raised 13 times since March, 2010, to tame stubborn price pressures and has said it will keep a watch on how the inflation pans out in the months ahead. The RBI will review monetary policy on Thursday and analysts expect it to hold rates as the central bank would prefer to wait and examine the steps taken by the government in the Budget to be unveiled on March 16. RBI has reduced the cash reserve ratio, the proportion of deposit that banks have to keep with RBI. The RBI has asked the government to unveil a credible fiscal consolidation plan to help it ease tight monetary policy. Non-food manufacturing inflation, declined further to 5.8% in February from 6.7% in January. The third monthly consecutive decline in non-food manufacturing inflation suggests moderation in domestic demand, according to Crisil.