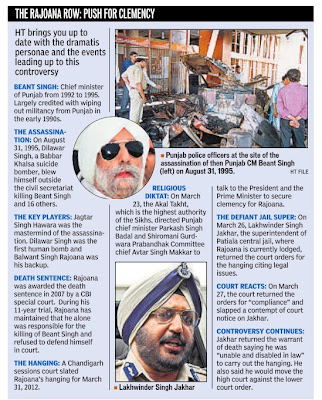 In a bizarre turn, the state government of Punjab, which prosecuted the assassin of former chief minister Beant Singh, is now doing its best to save him from the gallows even as a local court on Tuesday ordered that he be hanged on Saturday. The Akali Dal ramped up its campaign to save Babbar Khalsa terrorist Balwant Singh Rajoana with CM Parkash Singh Badal and his son Sukhbir flying to Delhi to meet the President with a clemency plea. The Patiala Central jail SP refused to accept the death warrant, citing “legal infirmities in the procedure”. Rajoana, who launched the attack that killed Beant Singh and 15 others in 1995, however, demanded to be hanged, saying politicians were trying to get mileage by offering mercy. In a letter released from Central jail, Patiala, on Monday, Rajoana (40) termed Akali leaders as “cheaters” and criticized Congress and BJP for “trying to politicize my mission. Punjab remained on the boil with radical Sikh organizations having given a call for a statewide bandh on March 28 against the impending hanging of Rajoana. According to the court’s orders, Rajoana has to be hanged on Saturday at 9am inside the Patiala jail premises. Rajoana also wrote that the Akali leaders failed to secure justice from Delhi for innocent Sikhs and should not now throw their turbans before Delhi. Beant Singh was killed on August 31, 1995. Other than Rajoana, another accused Jagtar Singh Hawara had also been awarded death sentence but that was commuted to life imprisonment. The CBI has challenged this commutation in the Supreme Court and sought capital punishment for Hawara. Lakhwinder Singh Lakha, who was also involved in the assassination, was awarded life imprisonment and he has filed an appeal in the Supreme Court for his acquittal. Meanwhile, the Akal Takht has urged Sikhs to maintain ‘sankoch’ (refrain) from work and to sport saffron turbans and duppattas besides unfurling saffron flags to mark their protest against the impending hanging.