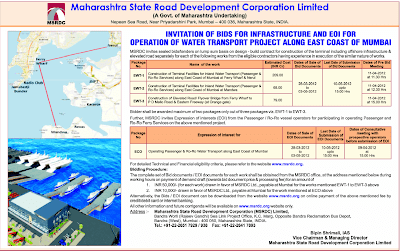 After years of talk, there is some cause for cheer for water transport on Mumbai's eastern coast with the Maharashtra State Road Development Corporation (MSRDC) pushing ahead with plans for passenger and roll-on/roll-off ferry service to be ready by 2014. MSRDC officials said that the initial project will mean passenger and roll-on/roll off transport ferries plying from Ferry Wharf to Mandwa and also to Nerul. Both trips will take approximately 25 minutes, the officials said. The ferries will be a boon to city residents and it will cut off more than 90 minutes from the usual travel time by road. “Tenders for building the terminals have been floated and we expect work to commence in June and be finished in 18 months. The project will cost a total of Rs 475 crores,’’ said senior MSRDC officials. MSRDC has decided to build the terminals through a cash contract and then let private parties ply ferries by paying a licence fee. “Initially we will build jetties at Ferry Wharf, Mandwa and Nerul and later expand the route as the passenger and car traffic goes up. The passengers will have to pay Rs 100 per person one way and the fare for cars will be from Rs 280 to 300,” the official said. MSRDC officials said there would be separate ferries for vehicles and passengers. The cost of building a modern terminal facility at Ferry Wharf and Nerul is estimated to cost Rs 209 crores while the construction of a terminal at Mandwa would cost Rs 68 crores. There will be an elevated road from Ferry Wharf to P D’Mello Road and the eastern freeway at Orange Gate will cost Rs 79 crores.