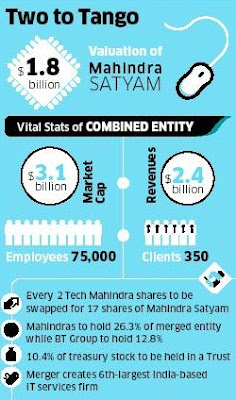 The $14.4-billion Mahindra Group unveiled the widely anticipated merger of its two IT services firms, Tech Mahindra and Mahindra Satyam, creating a $2.4-billion entity, which is poised to be India’s fifthlargest software outsourcing company by revenue. The development comes three years after the group acquired the scandal-rocked Satyam Computer Services, later branding it Mahindra Satyam. As part of the merger, investors will get two Tech Mahindra shares (of Rs 10 face value) for every 17 shares of Mahindra Satyam (of Rs 2 face value). The group will own 26.3% in the combined entity while British Telecom, a strategic partner of the group in Tech Mahindra, will hold 12.8%. Since Tech Mahindra currently holds 42.65% in Mahindra Satyam (through Venturbay Consultants), 10.4% equity of the new entity that will come in existence because of this crossholding, post merger, this equity will be held as treasury stock in a trust, said the management at a press briefing in Mumbai on Wednesday. Following the announcement, Dalal Street gave its stamp of approval to the plan with Tech Mahindra stock closing up 5.5% at Rs 684 while Mahindra Satyam (still listed as Satyam Computer on the bourses) closed 4.6% up at Rs 78. At the day’s closing levels, the two entities together are valued at a tad over Rs 17,800 crore (about $3.5 billion). The new entity, the branding of which will be decided over the next few months, will compete with the likes of Tata Consultancy Services, Infosys and Wipro for bagging big international outsourcing contracts. Tech Mahindra will issue 10.34 crore new shares, increasing its number of outstanding shares to 23.08 crore and its equity capital to Rs 230.8 crore, said the management. This values Satyam at Rs 76.3 a share ($1.8 billion), according to Bloomberg. “This merger does not bring about any cost savings. Instead, it’s driven by the proposition of delivering better value to our customers, and project the power of one,” said C P Gurnani, CEO, Mahindra Satyam. The management said there will be zero redundancies post merger but did not rule out some redeployment at the leadership level across functions. Mumbai will be the new headquarter for the merged entity. “We did the merger when Mahindra Satyam reached normalization and was in a steady state so that it’s a merger of equals,” said Vineet Nayyar, vicechairman & MD, Tech Mahindra and chairman, Mahindra Satyam. The joint entity will have a unified go-to-market strategy with revenues spread across telecom, manufacturing, media & entertainment, banking and insurance, along with retail and healthcare. The new entity will leverage Tech Mahindra’s expertise in the mobility vertical while Mahindra Satyam’s diverse clientele will come in handy to widen the client base of the company.