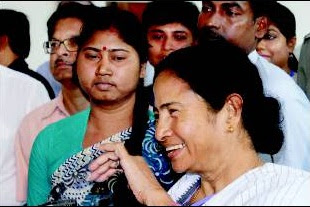 Maoist leader Suchitra Mahato — one of the key planners of the Silda EFR massacre and the last person with Kishanji when he was gunned down in Burisole forest — “surrendered” before the Mamata Banerjee government on Friday. The CM claimed that Suchitra had responded to her government’s “offer of peace” but the surrender and the flashbulb popping display at Writers’ Buildings raised questions. Mamata chaperoned Suchitra and her husband to the media stand at Writers’ and even acted as a minder, reacting angrily to any question that seemed to probe beyond the official line. Suchitra hardly looked the vicious killer, dressed in a sari and her hair all neatly done-up. She was last seen hobbling away from the Kishanji encounter site on the evening of November 23, with bullet injuries to her waist and leg. When reporters asked Suchitra if she had already been in custody, she replied: “No, I wasn’t arrested. I have come (to Kolkata) only today.” Suchitra was asked whether Kishanji was killed in an encounter. She remained silent, but the CM reacted angrily: “Don’t distort (facts). You cannot ask her such questions. Don’t make them hostile. It’s not for us to find out where they have been living all this time. That’s the police job, not the media’s.” Mamata also made it clear that she didn’t want any questions on Suchitra’s relationship with Kishanji. Before handing over the mike to Suchitra, Mamata told the media: “Don’t ask too many questions. Let her speak. Unless she chooses to talk at an official level, we can’t force her to open up.” The picture-perfect surrender did nothing to scotch “insider” stories that Suchitra was captured by the Trinamoolbacked anti-Maoist outfit, Jana Jagaran Mancha. Or that Prabir Ghorai, the person standing beside the CM as Suchitra’s husband on Friday, was the very person who had handed her to the armed vigilante group in early December. Or that she was treated for weeks at a private hospital in Kolkata under the name of Shefali Dutta