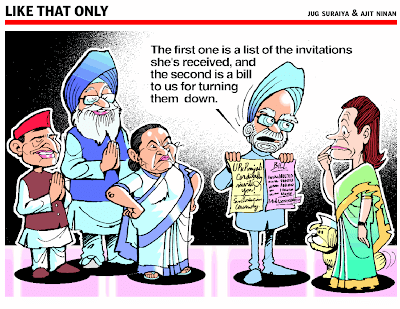 West Bengal CM Mamata Banerjee snubbed Prime Minister Manmohan Singh on Tuesday by sending a junior party member to Prime Minister Manmohan Singh’s dinner for UPA allies on Tuesday, setting the stage for a tense Budget session and more confrontations with the Congress. Earlier in the day, the Trinamool Congress moved an amendment against the President’s address to Parliament, which mentioned the setting up of the National Counter Terrorism Centre. Mamata is opposed to the NCTC in its present form as she feels it interferes with the federal structure of the Indian democracy. The Congress’s other ally, the DMK, also asked the government to vote against Sri Lanka on a US-sponsored resolution before the United Nations High Commission on Human Rights (UNHCHR) in Geneva on war crimes. It also asked the government to make its stand clear on the issue. Both amendments are embarrassing for the government as the Tamils’ issue has implications on ties with Colombo while the NCTC controversy can sear the government with the BJP waiting in the wings. Apprehensive of a BJP-led opposition bid to latch on to the amendments to press for a vote that could endanger the government, finance minister Pranab Mukherjee requested the allies to withdraw them. Speaking at the PM’s dinner, Mukherjee urged the allies to express their views during speeches in Parliament, but not leave a decision on withdrawing the amendments to the last moment as it could give the opposition more fodder against the government. The Congress trouble-shooter may have just been trying to goad the allies to fall in line as it is highly unlikely that the amendments will be pressed. The sole Trinamool Congress representative at the dinner, MP Ratna De, was under Mamata’s instructions to demand an economic package for Bengal, which she dutifully did. Pranab Mukherjee responded that Rs 8,000 crore had been sanctioned, referring to funds released under the Backward Region Grants Fund. The BJP’s plans to force a vote on any “federal” issue can be problematic for the government and Mukherjee’s remarks when he said “God forbid, if there is a mishap, the government can go” reflect that worry. The dinner also saw home minister P Chidambaram explaining the finer points of NCTC, arguing that its provisions did not violate the rights of the states. He said he will soon be writing a three-page letter to the chief ministers explaining the powers of the NCTC that is needed to better coordinate the fight against terror. The NCTC amendment has the capacity to pose a problem for the government as it is likely to draw support from a wide range of parties including Left and NDA. It was just such a coalition of interests that forced the government to abort a vote on the Lokpal bill in the winter session last year when it became evident that the Opposition version would be passed.