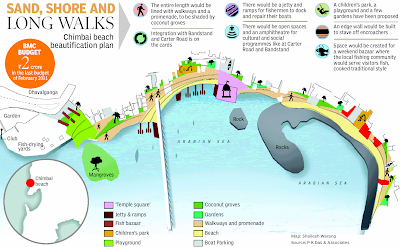 It used to be an idyllic strip of coast from St Andrew’s Church right up to Jogger’s Park in Bandra (West). Now it languishes in a decrepit state, strewn with rubble and overrun by encroachers. This is Chimbai beach, which outlines the eponymous fishing village. In 2008, local fishermen, along with Bandra residents, decided that enough was enough and that the beach must be restored to its former glory. A plan to turn this wish into a reality was conceived by architect P K Das — and nine months ago, it got the BMC’s approval. The beautification plan goes beyond reclaiming the stretch. The entire length would be lined with walkways and a promenade, to be shaded by coconut groves and other plantations. “Chimbai is a part of our masterplan for waterfront development and follows our earlier projects at Carter Road, Bandra Bandstand and Juhu beach,” said Das. “The endeavour is to integrate the beach plan and put it into the network of public spaces in Mumbai to safeguard it, as it’s now open to encroachments. There will be spaces (a jetty and ramps) for fishermen to dock and repair their boats. There will be other spaces to carry out their cultural and community activities,” said Das. It would be integrated with Bandstand and Carter Road. The plan also features open spaces and an amphitheatre for cultural and social programmes like at Carter Road and Bandstand. Extra toppings include a children’s park, a playground and a few gardens as well. An edge wall has been envisioned to prevent its defacement and keep it off-limits from encroachers. “We have also planned for weekend bazaars where the local fishing community could serve the visitors fish cooked in their traditional style. So, on weekends one could walk in and buy fried fish, fish curry or fish tandoor and enjoy a typical traditional fish meal,” said Das. But the reality is different today. The builder lobby has not spared these sandy shores and 15 buildings have come up on it. For the last seven years, the developers have been eyeing Chimbai, and constructing one-storey bungalows right on the beach. The idea of restoring the beach will begin to take shape only if the rubble-clearing process succeeds.