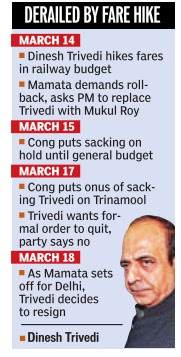 Mamata Banerjee’s new nominee in the railway ministry, Mukul Roy withdrew the hike in passenger fares for all classes except AC-II tier and first class, virtually rewriting the budget presented by his predecessor Dinesh Trivedi just eight days ago and which was praised by PM Manmohan Singh. Rolling back the fare hike, Roy invoked the UPA’s concern for the “aam aadmi” to reject Trivedi’s argument that an increase in fares was necessary to improve passenger safety. Roy, who replaced partyman Trivedi after the latter defied Mamata to hike fares, also tossed out of the window the “reforms” proposals announced by his predecessor—setting up of an independent tariff regulator, restructuring of the Railway Board on professional lines and creation of posts of member (PPP) and member (safety).