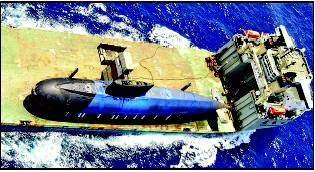 INS Chakra, the nuclear-powered Akula-II class submarine taken on lease from Russia for 10 years, will reach Indian shores in the next few days. It will formally be inducted into the Navy, in the presence of defence minister A K Antony, at Visakhapatnam on April 4. With this, the country’s protracted wait for a nuclear submarine, which can operate underwater for months at end, is finally over. But this does not mean India now has an operational nuclear weapon triad – the capability to fire nukes from land, air and sea – since INS Chakra is not armed with nuclear-tipped missiles due to international non-proliferation treaties. The triad will be in place only when the indigenous nuclear submarine, the 6,000-tonne INS Arihant, equipped to carry a dozen K-15 (750-km) or four K-4 (3,500-km) nuclear-tipped ballistic missiles, becomes fully operational next year. The 8,140-tonne INS Chakra, which makes India the world’s sixth country afterUS, Russia, France, UK and China to operate nuclearpowered submarines, of course, has boosted India’s underwater combat arm that is currently grappling with just 14 ageing conventional diesel-electric submarines. Armed with the 300-km range Klub-S land-attack cruise missiles as well as other missiles and advanced torpedoes, INS Chakra will be potent ‘hunter-killer’ of enemy submarines and warships as well as provide effective protection to a fleet at sea. INS Chakra will also be used to train sailors in the intricate art of operating nuclear submarines. Incidentally, the ‘Charlie-I’ class nuclear submarine India had leased from Russia from 1988 to 1991 was also named INS Chakra but the expertise gained on it was steadily lost since Indian Navy did not operate any other nuclear submarine thereafter. The new 10-year lease flows from the January, 2004, agreement, with India funding a major part of Nerpa’s construction at Komsomolskon-Amur shipyard after Russia stopped it midway due to funds crunch. It was slated for induction much earlier but technical glitches delayed the process, which included a toxic gas leak in November, 2008, that killed 20 Russian sailors.