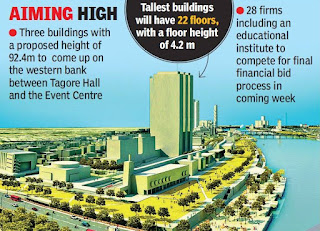 On western bank of Sabarmati riverfront, three buildings with a height of 92.4m are set to dramatically change the city’s skyline. These buildings will mark their presence as the city’s tallest buildings.

Pre-bid meetings for three buildings were held recently. and will be built between Tagore Hall and the Event Centre. There is a proposal for five more buildings on the eastern bank of the riverfront. Officials at Sabarmati Riverfront Development Corporation Limited claim that its tallest building will house 22 floors -- with each floor being 4.2m high.

The AMC invited expression of interest for three buildings from developers earlier this year. A total of 28 firms, including an educational institute, will compete in the final bid process in the coming week. Nearly 40% firms have shown interest in building a residential project, while 30% are interested in constructing a commercial project. Another 30% hav a preference for a residential-cum-commercial project.

Municipal commissioner Mukesh Kumar claimed SRFDCL has permitted building with floor space index  of up to 17, depending on size of the plot. “The tallest building will be 92.4 m which will be taller than SVP hospital,” he says. The building will house 22 floors and each floor will be 4.2m high leaving enough space for utilities like air conditioning ducts, electric wiring and ventilation to be installed along the ceiling.

Speaking of tall buildings in Ahmedabad city, SRFDCL official revealed that Ahmedabad Municipal Corporation-run Sardar Vallabhbhai Patel Hospital is currently the tallest at 78m with 18 floors. In terms of number of floors, a residential building project under construction near Town Hall has the highest number of storeys —25, but is 70m tall.