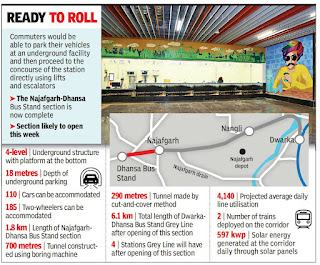 This week is likely to see the opening of two important stretches of Delhi Metro — the extension of Grey Line (Dwarka-Najafgarh) to Dhansa Bus Stand and the opening of the “missing link” between Trilokpuri and Mayur Vihar Pocket-1 stations of Pink Line (Majlis Park).

With the opening of this extension, Delhi Metro network would become 390km long with 286 stations. The Dwarka-Najafgarh section of the 5.4km-long Grey Line opened in 2019 with three stations — Dwarka, Nangli and Najafgarh. Only the1.2kmlong extension to Dhansa Bus Stand remained to be opened.

The “missing link” at Trilokpuri on Pink Line, Delhi Metro’s longest corridor, which led to the line functioning as two separate corridors, is likely to open to the public this week. Two and a half years after the line first opened, DMRC managed to bridge the gap between Trilokpuri and Mayur Vihar Pocket-1 stations last month.

The 58.6km-long Pink Line is one of the most ambitious corridors built by DMRC and also called the “Ring Corridor” as it functions as an arc, connecting all the existing corridors. However, unavailability of land at Trilokpuri had meant that DMRC couldn’t construct the crucial stretch. As a result, while one section of the corridor operated from Majlis Park to Mayur Vihar Pocket-1, with trains reversing from there, trains coming from Shiv Vihar returned from Trilokpuri.

Dayal said that Dhansa Bus Stand station had been adorned with attractive artworks and photographs, displaying the rich heritage, culture, flora and fauna of the suburban locality.

“The Najafgarh-Dhansa region of southwest Delhi has deep cultural roots. It is rich in historical content and also home to a marshy ecosystem that encourages the visit of migratory birds and flourishing of local wildlife. The artworks and photographic displays have tried to capture these unique characteristics of this area,” said Dayal, adding that photographs on printed glass panels at the station also showcase the rich biodiversity, which is themed “Migratory Birds”.

A hand-painted artwork shows residents coming together to honour the essence of their values and it is themed “Fringes of rural-urban progression”.

“Agriculture and animal husbandry are the main sources of income for the locals, but real estate projects and event venues contribute significantly to economic progression. The colour palette of the station has been kept earthy and bold to show the amalgamation of rural and urban values,” Dayal said.

He added that the station’s decoration had been done in line with DMRC’s efforts to utilise its premises “as a platform to showcase the rich heritage and culture of the nation”. A number of other stations on the DMRC network have also been decorated with eye-catching artworks and displays.