River goes down the drain in MMRDA’s latest regional plan 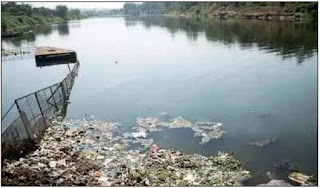 A river in Thane district has been referred to as a “nullah” (drain), by the state’s development body MMRDA in its regional plan which was released recently. The usage of the term has left environmentalists “shocked”. While government agencies have been spending crores to conserve and beautify river Waldhuni, MMRDA’s faux pas in the nomenclature has even left locals bitter.

The Waldhuni originates from Ambernath hills, flowing through Ambernath, Ulhasnagar and Kalyan.

MMRDA has submitted a blueprint for development of Mumbai metropolitan region by 2036 and the administration has proposed measures to prevent pollution and conserve the environment.

An NGO, Vanshakti, had moved Supreme Court in connection with river Waldhuni. The top court had last year pulled up the state government for failing to address water pollution in Waldhuni and Ulhas rivers. Stalin D, founder of Vanshakti, said, “It is shocking... At the next hearing, likely in two weeks, we’ll inform the Supreme Court about MMRDA’s act”.

Activist Ashwin Aghor said, “It could be a move to benefit chemical units at MIDC in Ambernath. If, on paper, a river is shown as a nullah, [public] agencies have no responsibility to protect it.”

Activist Shashikat Day-ma said, “If MMRDA does not rectify its mistake, environmentalists will protest .”