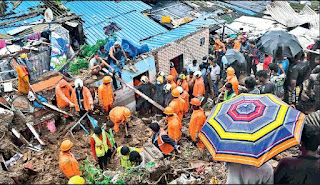 Torrential rains wreaked havoc in Mumbai on Sunday, leaving 32 dead and six injured in five separate incidents of landslides, electrocutions and a house collapse. The downpour began in the early hours of Sunday and continued through the day.

A landslide in Mahul’s Bharat Nagar claimed the most lives, with 19 people reported dead. In Vikhroli’s Surya Nagar, 10 hutment dwellers were killed as five shanties collapsed after a landslide. Elsewhere, three persons were electrocuted and one died in a house collapse.

The Mumbai airport was shut for close to five hours early in the morning and some flights were diverted. Road and rail traffic was also hit.

Both the Centre and state announced relief for the families of those killed in landslides in Mahul and Vikhroli.

One person was reported dead after a house collapse in Bhandup (W). A 26-year old man was electrocuted at an Andheri shop in the morning and another 21-year old man was electrocuted at Kandivli (E) after he came into contact with a submerged electric box. He was trying to move his belongings to a safer place during the downpour. Meanwhile in Nalasopra, a four-year old boy is feared to have fallen into a manhole that was left open to drain out rainwater on Sunday.

“Saddened by the loss of lives due to wall collapses in Chembur and Vikhroli in Mumbai,” PM Narendra Modi tweeted. He announced Rs 2 lakh from the Prime Minister’s Relief Fund to the next of kin of those who died in the landslides and Rs 50,000 to those who were injured.

Chief minister Uddhav Thackeray announced Rs 5 lakh ex gratia each to the families of the deceased and free treatment for the injured. He asked authorities to ensure that medical facilities continue unhampered at jumbo Covid centres.

Power outages were reported in several areas for as long as eight hours. Parts of the city were waterlogged with water entering homes in both the eastern and western suburbs. Some parts of the city did not receive drinking water after flood-water entered the Bhandup water purification complex and operations were shut down.

At 1pm on Sunday, the IMD issued a red alert indicating extremely heavy rains at isolated places for a 24-hour period for Mumbai. For the second time in two days, Mumbai saw intense rain activity overnight with as much as 200mm of rain being recorded in six hours (11.30am-5.30am) on July 18.