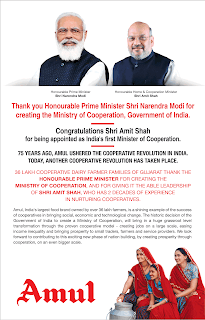 In a move to get better idea before officially taking the additional charge of a newly created ministry by the central government, Union home minister Amit Shah met leading figures of the country’s cooperative sector.

Shah’s meeting took place three days after he was given additional charge of newly created ministry of cooperation by PM Modi while relocating the portfolios of his fresh batch of the Council of Ministers.

Those who met the home minister include National Cooperative Union of India chairman Dileep Sanghani, the chairman, and the managing director of the Indian Farmers Fertiliser Cooperative Limited BS Nakai, and US Awasthi, respectively, as well as Agricultural Cooperative Marketing Federation of India Ltd chairman Bijender Singh.

The meeting took place at Shah’s residence. “Under the leadership of Modi, we are determined to make cooperatives and all cooperative institutions more empowered,” Shah tweeted after the meeting.

Officials said Shah has not yet assumed official charge of the ministry of cooperation, and he started consultation with key persons and officials related.