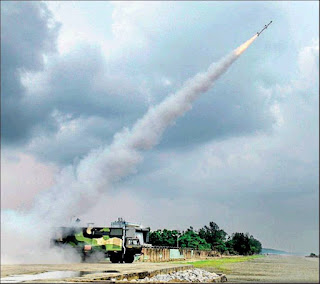 The indigenous new-generation Akash surface-to-air missile, with an interception range of 25-30 km, and the man-portable anti-tank guided missile, with a 2.5-km strike range, were successfully tested by DRDO on Wednesday.

Both the missiles are still undergoing developmental trials but will boost the firepower of the armed forces once they are fully operational for induction. The earlier version of the Akash missiles, which can intercept hostile aircraft, helicopters, drones and subsonic cruise missiles at a range of 25 km, have already been inducted in large numbers, with orders worth around Rs 24,000 crore being placed.

“The new Akash-NG weapon system, once deployed, will prove to be a force multiplier for the air defence capability of IAF,” said a DRDO scientist. The missile was tested from Integrated Test Range off the Odisha coast at 12.45 pm on Wednesday.

“The flawless performance of the entire weapon system was confirmed by the complete flight data captured by radars, electro-optical tracking and telemetry systems. During the test, the missile demonstrated high manoeuvrability required for neutralising fast and agile aerial threats,” he added.

The low-weight, fire-and-forget MP-ATGM was also successful in hitting the target, which was “mimicking a tank”, in a direct-attack mode and destroying it with precision. The Army at present has a huge shortage of ATGMs.

“The MP-ATGM test validated the minimum range of 200-meter successfully. All the mission objectives were met. The missile has already been successfully flight tested for the maximum range of 2.5-km,” said the scientist.