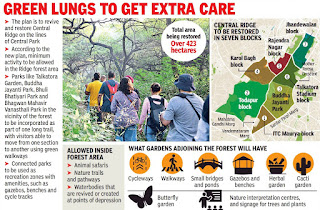 Plans to rejuvenate Delhi’s Central Ridge on the same lines as New York’s Central Park have seen some changes in the past few months, with the forest department objecting to commercial activities, including cycling, within the 423-hectare forest area. While earlier plans had incorporated amenities such as cycleways, walkways and even small bridges, these have been scrapped and only animal safaris will now be permitted in the Central Ridge. There will be walking trails, of course, but they would be natural ones, not man-made. To compensate, circuits will be created to enable people to go from the forest area to adjoining parks such as Talkatora Garden or Buddha Jayanti Park.

Professor C R Babu, head, Centre for Environmental Management of Degraded Ecosystems, who is leading the rejuvenation project, including replacement of the invasive vilayati kikar tree with native species, said the ‘sanctity’ of the Ridge would continue and recreational activities would be allowed only in parks fall within the Ridge ‘circuit’.

“We want to revive the Central Ridge and that will always remain the priority,” said Babu. “The entire landscape will be evolved to consist of native tree species that should have been native to the Ridge instead of vilayati kikar. The latter will be systematically replaced. The revival work will take place in seven phases, with the entire rejuvenation area divided into seven zones. We will begin with work on the first zone on Sardar Patel Marg, opposite the ITC Maurya hotel.”

A recent meeting with forest and wildlife department considered some suggestions that had been made, and some amendments were made accordingly in the plans, Babu revealed. “The new plan has largely been approved, but there are a few sticking points. We will sort them out soon and the rejuvenation plan can then commence,” he said.

A forest official confirmed the developments, disclosing that suggestions had been taken from other field experts. “A presentation on the plan was made and some changes were made regarding certain aspects. In the first phase, work will begin on a 100-hectare area,” said the official.

Babu also clarified there would no activities in the forested portions of the Ridge save for wildlife safaris. “There is a lot of fauna within the demarcated area, and more wildlife will return once the region is revived,” the professor explained. “People will be allowed to use the natural trails, but no other disturbance will be permitted in the main forest. Already, smaller parks and gardens have been created outside the forest and these are where park benches, gazebos and butterfly patches can be developed. The forest area will have natural waterbodies. Depressions will be revived to hold water. The parks can also have artificial ponds if required.”