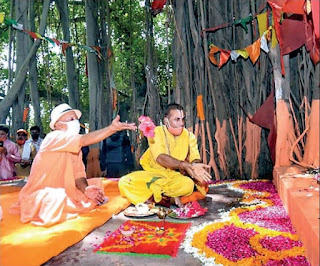 The massive plantation efforts taken up by the Yogi government in the last four years have increased the state’s forest cover by 127 square kilometres.

As per the report of the Forest Survey of India, the forest cover in UP increased by 127 sq km in 2019 compared to the 2017 assessment. The report said the state’s tree cover is 3.05% against the national average of 2.89%.

Forest officials give the credit to the chief minister for taking several green initiatives since 2017.

The CM got the plantation target hiked for every year. At least 65.94cr seedlings of different species have been planted in the state between 2017 and 2020.

In 2021-22, the state government will plant 30 crore saplings, which would raise the number of trees planted in the five years of the Yogi government to over 100 crore.

The number of saplings sowed on occasions like the World Environment Day and others are over and above the annual target. Environmentalists agree that the state government has also ensured the safety and monitoring of the trees because of which the green cover has improved.

Environment expert Sanjay Kumar said the total forest cover in the state is 14,806 sq km (6.15%). The green cover has increased in districts outside the terai belt in Lucknow, Chitrakoot, Mirzapur and Sonbhadra.

Apart from the forest department, 26 other government departments are participating in the drive.

The forest department will plant 10.8 crore saplings and the rest of the departments would plant 19.2 crore.

The departments would also get the saplings geo-tagged for better monitoring.