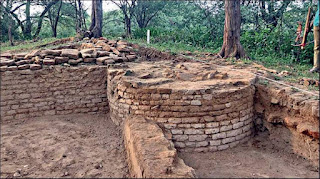 In search for the legend of Hastinapur, capital of the Kauravas in the epic ‘Mahabharata’, the Archaeological Survey of India will start excavations at the site, about 40km from Meerut — the first major project there in 70 years. The plan is to look for new evidence to ground the ‘Mahabharata’ in history and preserve earlier finds.

“As of now, the focus is on conserving exposed areas of the mounds and giving a facelift to old temples. A bit of landscaping, too. We will look into excavations after September, when the Monsoon is over,” superintending archaeologist of the newly-created Meerut circle of ASI, Brajsunder Gadnayak said. “Hastinapur is among five sites whose development has been proposed by the Centre.” The 2020 Budget had identified Hastinapur, along with Rakhigarhi (Haryana), Sivasagar (Assam), Dholavira (Gujarat) and Adichallanur (Tamil Nadu), to be revamped as “iconic” sites.

The first excavation at Hastinapur goes back to 1952, when archaeologist Prof BB Lal concluded that the “Mahabharata period” was around 900 BCE and the city was washed away by a flooded Ganga. Lal, known for his “discovery” of 12 temple pillars beneath the Babri Masjid that coincided with the revival of the Ram Janmabhoomi demand in 1990 and provided the interpretive framework for the court-appointed Ayodhya excavation team, was a strong believer in the historicity of religious epics and myths.

“No concrete development took place after that,” KK Sharma, associate professor of history at Multanimal Modi College in Modinagar, said. Then, in 2006, the discovery of an ancient burial ground in Sinauli, about 90km from Hastinapur, and that of a bronze “horse-driven war chariot” in 2018 catalysed the theory that the findings were from the “Mahabharata period” — because the epic mentioned chariots — and pushed back the period itself to 2000 BCE. Sharma was part of the 2006 Sinauli excavation.