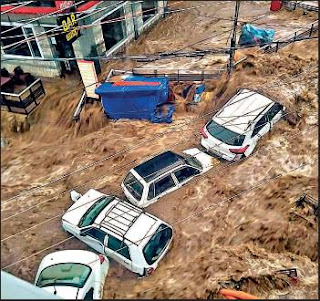 A woman and a girl were killed and 14 locals were missing as heavy rains since Sunday night wreaked havoc across Himachal Pradesh and floodwaters surged into villages and towns. National and state highways were blocked due to landslides and flash floods damaged houses and swept vehicles away.

Kangra was the worst-hit and both deaths were recorded there. A nine-year-old girl from Chahdi was swept away in the gushing water of a nullah when she was returning home from market. Her body was recovered after hours of search. The woman’s body was found in the debris of a landslide in Rulehad Boh valley. Twelve people were missing in Shahpur sub-division.

One person and two buffaloes were washed away at Manjhi Khad.

A 23-year-old woman from Kullu returning to Manali after trekking in the Hamta area was swept away in a flooded nullah and is missing. A member of her trekking team was injured in the incident.

At Bhagsunag, near Dharamshala, several vehicles and some houses were washed away by water that roared out of an overflowing local nullah. Twenty-five people are stranded in Rulehad Boh Valley and Haled Darini, in Shahpur sub-division, two in Gajkhad and two more in Shahpur Khad.

All tourists are accounted for till now and have been advised to stay put wherever they are as heavy rain is expected on Tuesday too. Everyone, including locals, has been advised to keep away from rivers and nullahs. Some 80 tourists stranded for hours were rescued from the Triund area beyond McLeodganj.

Landslides caused by heavy rain blocked the Chandigarh-Manali national highway and bypass road. The Manali-Leh highway was also partially blocked due to flash floods at three places. Two houses were partially damaged in Mandi district and one vehicle fell into the Chenab river in La-haul valley. Electricity supply was also suspended at some places. 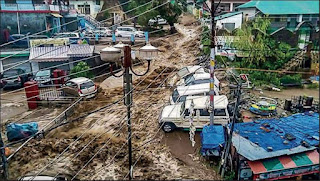