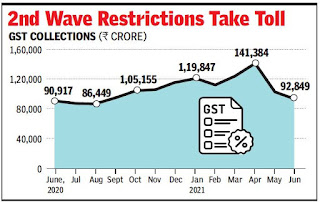 For the first time in eight months, GST collections slipped below Rs 1 lakh crore due to the lockdown across large parts of the country, with the mop-up adding up to Rs 92,849 crore in June.

Latest data released by the finance ministry (for collections in June, for transactions in May) was the lowest since Rs 95,480 crore collected in last September. But, the government was optimistic that the tally will improve this month as economic activity has resumed, following the second wave of coronavirus infections.

“Daily average generation of e-way bill for the first two weeks of April 2021 was 20 lakh, which came down to 16 lakh in last week of April 2021 and further to 12 lakh in the two weeks between May 9th and 22nd. Thereafter, average generation of e-way bill has been increasing and has reached again to 20 lakh level since week beginning June 20. Therefore, it is expected that while the GST revenues have dipped during the month of June, the revenues will see an increase again from July onwards,” the finance ministry said.

While central GST was down 13.5%, the other segments — state and integrated GST — reported an increase. The other segment that saw a drop was the cess collection, indicating that luxury and sin goods, such as automobiles and coal, were more affected by the lockdown.

Although, the government had come to suggest that Rs 1-lakh-crore monthly mop-up is the new normal, the lockdown has clearly upset the calculations.