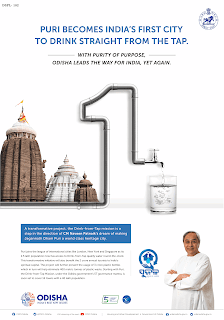 Puri, which attracts two crore tourists every year, has earned the distinction of becoming the first Indian city to get round-the-clock piped pure drinking water.

“The launch… in Puri is a new chapter in Odisha’s development. It makes the heritage city the first in India to achieve this milestone, matching the standards of supply of drinking water in many foreign cities. Around 2.5 lakh people of Puri town and two crore tourists visiting the city every year can now get quality drinking water from taps, doing away with the need to store and filter water,” Patnaik said in his address.

Drinking water fountains have been set up at 400 locations in the pilgrim town to ensure that visitors do not carry plastic bottles. The government hopes that the Sujal piped water scheme will eliminate the use of three crore plastic bottles, thereby preventing the formation of 400 metric tonnes of plastic waste in Puri every year.

“Sujal, which is a transformative project under the government’s 5T charter (Transparency, teamwork, technology, time frame and transformation), has been commissioned in only nine months. The project will subsequently be extended to 16 other urban localities with a 40-lakh population,” he said.

Quality drinking water is closely linked with good health, the human development index and the economy, the CM said. To ensure that the state gets safe and hygienic drinking water, the Odisha government has increased its budget from Rs 200 crore to Rs 4,000 crore in the last five years.

The initiative has been launched under the “Jalsathi” programme and involves joining hands with women’s self-help groups (SHGs) under Mission Shakti, a state initiative to empower women, according to the government. Quality check of the drinking water will be conducted by “Jalsathis” picked from the women’s SHGs.