Somewhere on the Eastern Front.... 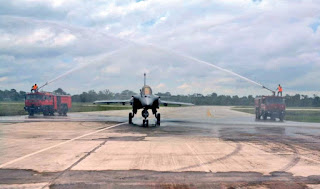 A Rafale gets water cannon salute during the induction ceremony at the Hasimara airbase in West Bengal on Wednesday. India has now deployed its latest omni-role Rafale fighter jets close to the Sikkim-Bhutan Tibet tri-junction on the eastern front with China, which constitute a new deterrent just before the next round of top-level military talks between the two countries likely on Saturday, reports Rajat Pandit. Eight new Rafales, armed with decidedly deadly weapons packages, were formally inducted into the 101 ‘Fal cons of Chhamb and Akhnoor’ Squadron at the Hasimara airbase. The deployment of the French-origin Rafales in the eastern sector, along with the Russian-origin Sukhoi-30MKI fighters already operating from air bases like Tezpur and Chabua, will lead to a greater offensive punch against China