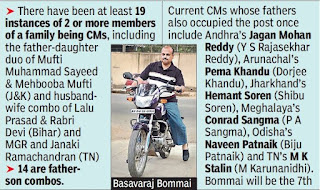 Karnataka home minister Basavaraj Bommai, a close confidant of outgoing chief minister B S Yediyurappa, will be sworn in on Wednesday as the 20th CM of the state.

Bommai’s elevation to the top post keeps two key constituents of the BJP — Lingayat community and Yediyurappa — happy. As a Lingayat himself, Bommai will be acceptable to the politically influential community and by choosing him, the BJP high command seems to have rewarded Yediyurappa for walking graciously and promising to work for the party.

The 61-year-old three-time MLA from Shiggaon in Haveri district is the son of late S R Bommai, former Karnataka CM and ex-Union minister. It makes the Bommais the second father-son duo after H D Deve Gowda and H D Kumaraswamy to become CMs in Karnataka. Senior Bommai was the CM for nine months in 1989.

An engineering graduate, who started out by working for the Tatas in Pune, Bommai’s name was not prominent among those thought to be in the reckoning for the chief minister job until Tuesday.

But Yediyurappa’s support, according to BJP insiders, tilted the balance in favour of Bommai. “It is a masterstroke by Yediyurappa and a putdown to his detractors who raised a banner of revolt against him with an eye on the CM’s chair,” said a BJP MLA. Bommai took the blessings of Yediyurappa by touching his feet immediately after his name was announced.

The duo later called on governor Thaawarchand Gehlot and staked a claim to form the government. Originally from the Janata Parivar, Bommai’s selection for the coveted post also marked a new beginning in the BJP as it came against a popular assumption that outsiders cannot aspire for big posts in the party or its governments. Bommai joined the BJP just before 2008 assembly elections. He served as water resources minister between 2008 and 2013 and home minister from July 2019. For the past two years, Bommai was literally Yediyurappa’s trusted No 2 with the latter depending on him for day-to-day administration. It is being said that BJP central leadership was impressed with Bommai’s administrative acumen. He also built bridges with the central leadership with his constant interaction with them and as Yediyurappa’s representative for the last two years.

His performance at the GST council meetings also received a lot of appreciation by the high command, sources said. The BJP has, in recent days, leaned towards unconventional candidates for key positions from Karnataka, including in the Rajya Sabha and the Union Cabinet. So, there was an expectation that it may spring a surprise. But Bommai’s choice indicated the party’s keenness to protect the Lingayat vote base rather than indulge in experiments.