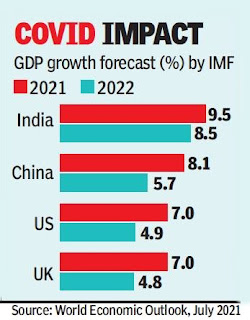 The International Monetary Fund cut India’s gross domestic product growth to 9.5% for 2021-22, from its earlier estimate of 12.5%, citing the impact of the second wave on the economy and recovery process.

In its latest update to the World Economic Outlook, the IMF said growth prospects in India have been downgraded, following the severe second Covid wave during March–May and expected slow recovery in confidence from that setback.

“Faster-than-expected vaccination rates and return to normalcy have led to upgrades, while lack of access to vaccines and renewed waves of Covid-19 cases in some countries, notably India, have led to downgrades,” IMF chief economist Gita Gopinath said in a blog.

In countries with high vaccination coverage, such as the UK and Canada, the impact would be mild. Meanwhile, countries lagging in vaccination, such as India and Indonesia, would suffer the most among G20 economies, according to the World Economic outlook update. China is estimated to grow by 8.1% in 2021 and by 5.7% next year, while India is projected to grow by 8.5% in 2022-23. India still retains the tag of the fastest growing major economy.

IMF is the latest in a string of economists, brokerages, multilateral agencies, which have reduced India’s GDP growth estimates against the backdrop of the second wave, which hurt the economy. The RBI now estimates GDP growth at 9.5% for 2021-22, lowering it from its earlier estimate of 10.5%.

The government expects growth to be robust for the current fiscal and experts say impact of the second wave is likely to be limited to the April-June quarter with some possible spillover to July. The global economy is projected to grow 6% in 2021 and 4.9% in 2022. The 2021 global forecast is unchanged from the April 2021 WEO, but with offsetting revisions.