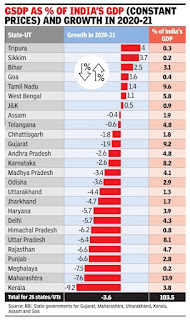 Many of the state GSDP numbers are quick estimates and are likely to be revised in the future. But as they stand, they suggest that some states actually witnessed economic growth even in the midst of the pandemic even as the Indian economy as a whole shrunk by 6.6%.

Ironically, both are significantly dependent on tourism, an industry that was among the worst hit by pandemic.

Other large states that managed to restrict the losses to less than 3% of their GSDP in 2019-20 were Gujarat, Karnataka, Andhra Pradesh, Telangana, Assam and Chhattisgarh. Among them, Gujarat constituted 9.2% of the national GDP in 2020-21 while Karnataka’s share was 8.2%.

Kerala seems to have suffered the most as the state’s economy shrunk by 9.2%. The figures were 7.6% for Maharashtra, the country’s largest state economy with nearly 14% of national GDP for 2020-21.

Other states whose economies shrunk by 6% or higher were Haryana, Delhi, HP, UP, Rajasthan and Punjab. Among smaller states, Meghalaya was the worst hit as its economy shrunk by 7.5%. The data for 2020-21 was not available for Andaman and Nicobar Islands, AP, Chandigarh, Manipur, Mizoram, Nagaland and Puducherry.