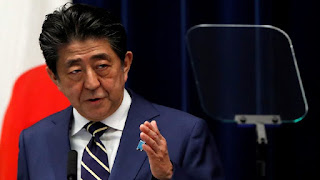 PM Modi paid tribute to Shinzo Abe, writing, “In the passing away of Abe, Japan and the world have lost a great visionary. And, I have lost a dear friend.”

In a blog titled ‘My Friend, Abe San’, Modi described Abe as “an outstanding leader of Japan, a towering global statesman, and a great champion of India-Japan friendship”. Highlighting Abe’s legacy, Modi said the world will always be indebted for his foresight in recognising the changing tides and gathering storm of the time and his leadership in responding to it.

“Long before others, he, in his seminal speech to the Indian Parliament in 2007, laid the ground for the emergence of the Indo-Pacific region as a contemporary political, strategic and economic reality—a region that will also shape the world in this century. And, he led from the front in building a framework and architecture for its stable and secure, peaceful and prosperous future, based on values that he deeply cherished...” wrote Modi.

A great friend of India who worked to impart more strategic depth to relations with India, Shinzo Abe designed and formalised Quad and was also the chief architect of Japan's Free and Open Indo-Pacific policy that aligned closely with India's own ‘Act East’ policy and acted as a counterbalance to China's increasing influence and assertiveness. Abe is still remembered for his “Confluence of Two Seas” speech in the Indian Parliament in 2007, in which he as PM declared that India-Japan relationship is blessed with “the largest potential for development of bilateral relationship anywhere in the world”.

Interestingly, while quoting Vivekananda, Abe had then argued that among many contributions that India can make to the world history, there is “first of all its spirit of tolerance”. Abe always maintained that India and Japan shared not just “fundamental values” such as freedom, democracy and respect for basic human rights but also strategic interests. Describing Abe as a “towering global statesman, an outstanding leader and a remarkable administrator”, PM Narendra Modi said in a tweet:“As far as global leadership is concerned, Abe San was ahead of his times. The Quad, the ASEAN-led forums, the Indo Pacific Oceans Initiative, the Asia-Africa Growth Corridor and the Coalition for Disaster Resilient Infrastructure all benefited from his contributions. ” Abe promoted the use of Indo-Pacific over the earlier Asia-Pacific signaling the primacy Japan attached to India's role in the region.

Abe was also possibly the first foreign leader to talk publicly about the idea of Quad in India when he said in 2007 that with Japan and India coming together, this “broader Asia” will evolve into an immense network spanning the entirety of the Pacific Ocean, incorporating the United States of America and Australia. “Open and transparent, this network will allow people, goods, capital, and knowledge to flow freely,” he had said.