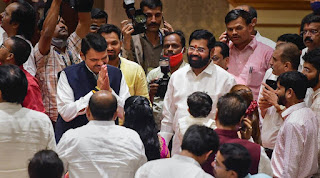 As expected, chief minister Eknath Shinde’s government supported by the Bharatiya Janata Party on Monday won the critical ‘vote of confidence’ in the Maharashtra legislative assembly. In the final tally with a division of votes, the government secured 164 votes and the opposition got only 99 votes in the 288-member lower house.

This is the second big legislative victory for the Shinde government – sworn-in on June 30 along with Deputy chief minister Devendra Fadnavis – in the past two days.

The Speaker’s election followed by the trust vote for the Shinde-led government came on the second day of the 2-day special session of the assembly convened by governor Bhagat Singh Koshyari.

The Uddhav Thackeray-led group of Shiv Sena has moved the Supreme Court against the action of the newly elected Speaker of the Maharashtra Assembly, who recognised the whip nominated by the Eknath Shinde faction as the chief whip of the Shiv Sena. The court scheduled this matter for hearing on July 11.

Earlier, the Maharashtra legislature secretariat struck down appointments of Ajay Chaudhary as the Shiv Sena legislature party leader and the chief whip Sunil Prabhu. The action came late on Sunday.