Maharashtra: Bullet train project gets all clearances from government 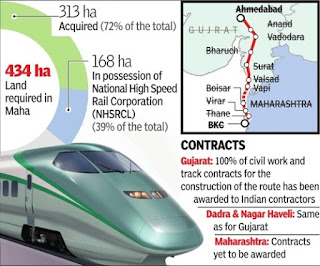 The Mumbai-Ahmedabad bullet train project has received a major push as the new Maharashtra government has given all approvals, implying that most issues related to land acquisition in the state are expected to be resolved soon. Railway ministry officials said the state government has committed to hand over the required land for a terminus at BKC by December.

In Maharashtra, 431 hectares are needed for the project, but only 72% has been acquired and only 39% is in physical possession of the National High Speed Rail Corporation, the implementing agency. Deputy chief minister Devendra Fadnavis in a post-cabinet briefing to journalists said, “All approvals for the bullet train project have been given by chief minister Eknath Shinde. ” Officials said Shinde cleared pending approvals on Wednesday, making way for faster implementation of the project. When the Shinde-Fadnavis government came to power, it had said its focus was to ensure speedy implementation of key projects that were stuck during MVA rule. The government is also looking to expedite the Metro 3 project, which has been stuck because of car shed issues.

On the bullet train project, NHSRCL cannot float tenders unless 90% of the land is in its possession. NHSRCL had recently pointed to the Maharashtra government that the Japanese side has requested likely dates for commencement of civil work in the state as tenders for underground stations at BKC and an undersea tunnel have been cancelled after repeated postponement. It pointed out that bids for construction of the underground terminus and the 21km under-sea tunnel cannot be floated unless land at BKC and Vikhroli is not handed over.

For BKC, land approval was given in February 2018 while for Vikholi, the proposal to change inland use was submitted to the urban development department in October 2019. For the balance 135km pf tracks in Thane and Palghar, relief and rehabilitation award, compensation award and gram panchayat sanction were required for some land parcels. Nearly 95 hectares of forest land also has not been awarded even though payment of mandatory charges was submitted in March 2021. In Palghar, 70% of a total requirement of about 288 hectares has been acquired, while in Thane, 78% of the required 141 hectares is now in possession of NHSRCL