Retail inflation eased marginally in June but stayed near the 7% mark and above the central bank’s upper tolerance band for the sixth month in a row, triggering prospects of more interest rate increases by the RBI in the months ahead.

Finance minister Nirmala Sitharaman vowed to continue the pointed attack on inflation and promised that the government and central bank will keep a strict vigil on the price situation.

Retail inflation, as measured by the Consumer Price Index, rose an annual 7% in June, nearly at the same level as in May and above the 6.3% seen in June 2021. Rural inflation was at 7.1% in June, higher than the 6.9% in urban areas. The food price index moderated but remained stubborn at 7.8% in June from nearly 8% in the previous month. The data showed that 11 of the 22 major states and Union territories had an inflation rate above 7% with the highest in Telangana at double digits of 10.1% and lowest in Bihar at 4.7%.

“I see the monsoon being favourable to agriculture. Production will be good and rural demand will remain intact. As RBI has estimated, till the start of the second half of the year, both RBI and govt will have to be mindful,” Sitharaman told reporters. “We will have to be mindful and watchful of the price movement. I will keep monitoring item by item to rein in prices for anything that goes haywire. This pointed attack on inflation will need to continue,” said the FM. Surging inflation has emerged as a major challenge for policymakers around the world as supply chains have been disrupted by the war in Ukraine. 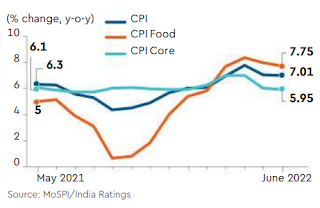