Droupadi Murmu will be youngest Prez 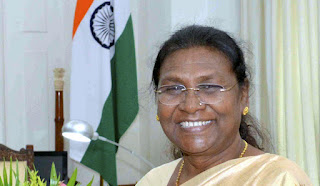 NDA’s presidential nominee Droupadi Murmu became the first tribal woman to be elected as President of India by defeating her rival, opposition candidate Yashwant Sinha, by a margin of 947 votes, bagging 64.03% of the electoral college votes against Sinha’s share of 35.97%.

Murmu, 64, is only the second former member of BJP after President Ram Nath Kovind to be elected President. A month younger than Neelam Sanjiva Reddy, who assumed office in 1977, she will be the youngest president ever. Murmu bagged votes from a total of 2,824 electors, including 540 MPs, while Sinha won the support of 1,877 electors, including 208 MPs.

The anti-BJP bloc can derive some satisfaction from the fact that their tally was better than what they had achieved five years ago when the NDA nominee beat opposition’s candidate Meira Kumar. In fact, Murmu’s first preference vote share, 64.03%, is the lowest since VV Giri’s 48.01% in the 1969 presidential polls.

However, there are doubts that the opposition achieved its objective of pitching this as a battle of ideologies. The support of parties like BSP and JD(S) for Murmu, the last-minute defection of her fellow Santhal, Jharkhand CM Hemant Soren, and confusing messages from senior figures like Mamata Banerjee muddied the message.

On top of that, by the time the counting got over, there was strong evidence of MPs and MLAs, 17 and 126 respectively, according to initial estimates, breaking away from their parties to vote for the former teacher from Odisha. NDA managers were happy with the across-the-aisle solidarity with her, something which pointed to the emergence of a tribal constituency in central and eastern India and appeared to validate BJP’s calculation behind the elevation of a tribal woman from a poor background who defied poverty, personal tragedies and social biases to become a minister and then Governor of Jharkhand.

Having made a big statement of their “pro-ST” credentials in the person of Murmu, they can be expected to cash in on any goodwill among the tribals of not only Odisha, Jharkhand, West Bengal, Madhya Pradesh and Chhattisgarh but also the Northeast, which is home to many tribal The odds were stacked against them, and the opposition bloc failed to generate excitement. Sinha was enlisted in the battle after three others — Sharad Pawar, Farooq Abdullah and Gopalkrishna Gandhi — refused to take the field. With a series of desertions by UPA allies, including Shiv Sena and JMM, besides Mamata Banerjee’s TMC, which had sought to take credit for Sinha’s candidature, teetering on the brink and the chatter about sizeable crossvoting by MPs and MLAs, the opposition had braced itself for a poorer show than what the final numbers delivered.

Murmu, who the NDA managers had predicted would bag over 68% votes, got the maximum votes from Uttar Pradesh, Maharashtra and Andhra Pradesh, while Sinha's tally was the highest in West Bengal and Tamil Nadu. Counting of votes in the presidential polls began in Parliament House at 11am on Thursday and returning officer PC Mody declared Droupadi Murmu as the victor after 9.30pm. The Election Commission is likely to issue ‘certificate of election’ to the winning candidate on Friday.

Sinha conceded defeat to Murmu around 8pm, shortly after the third round of counting was completed, and Murmu crossed the halfway mark. In a statement congratulating Murmu, Sinha said every In- dian hopes that as the 15th President she functions as the “custodian of the Constitution” without fear or favour. He also thanked the leaders of the opposition parties for choosing him as their consensus candidate in this election. “I also thank all members of the Electoral College who voted for me. I accepted the offer of opposition parties solely guided by the philosophy of Karma Yoga preached by Lord Krishna in the Bhagvad Gita — ‘Do your duty without expectation of the fruits thereof ’,” he said.

PM Narendra Modi and BJP president JP Nadda visited Murmu’s residence to congratulate her. “Smt. Droupadi Murmu Ji has been an outstanding MLA and Minister. She had an excellent tenure as Jharkhand governor. I am certain she will be an outstanding President who will lead from the front and strengthen India’s development journey,” the PM said on Twitter, after Murmu’s victory. 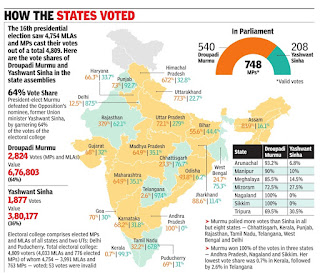