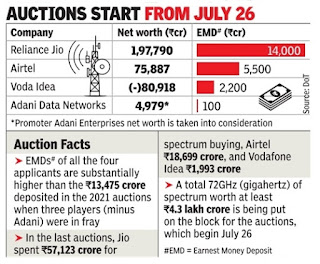 The stage is set for 5G auctions, with companies making the mandated earnest money deposits totalling Rs 21,800 crore. Though talks around the much-anticipated Ambani-Adani confrontation fizzled out with newcomer Gautam Adani-led group refusing to make heavy commitments towards the airwave sale.

While Jio, the country’s biggest mobile operator, submitted an EMD of Rs 14,000 crore, the Adani Group — represented by Adani Data Networks — committed just Rs 100 crore. This indicates that it may go for limited bandwidth capacity in few circles where it sees potential for captive enterprise telephony. Any big expansion move is likely to be unveiled after the auctions.

The EMD collections of all the four applicants are substantially higher than the Rs 13,475 crore deposited in the 2021 auctions when three players (minus Adani) were in fray. In the last auctions, Jio spent Rs 57,123 crore for spectrum buy, Airtel Rs 18,699 crore, and Vodafone Idea Rs 1,993 crore.

EMD gives an indication of a company’s strategy and gameplan for buying spectrum in the auctions. It also determines the eligibility points for the applicant, based on which a company buys airwaves across the telecom circles. It is estimated companies can spend nearly seven to eight times of the EMDs that they submit. This means that the capacity for the Adani Group to be a great disruptor is next to impossible. On the other hand, Jio’s EMD deposit shows that the company plans to stock up big when it comes to acquiring the next-generation mobile airwaves, which would catapult India to the coveted group of countries offering 5G telephony.

A total 72GHz (gigahertz) of spectrum worth at least Rs 4.3 lakh crore is being put on the block for the auctions, which begin on July 26. While the entry of Adani in the fray had spiced up pre-auction talks, the group had made it clear that it does not have any immediate plans to be in the consumer mobility space. It had said that its telecom foray is only for creating a private network to support its businesses that span airports to ports, and power as well as data centres. With its EMD at Rs 14,000 crore, the eligibility points assigned to Jio for the auction stand at 1,59,830, the highest in the list of four bidders, according to details given out by the telecom ministry. The eligibility points allocated to Airtel are 66,330, while that to Vodafone Idea are 29,370. Adani Data Networks received eligibility points of 1,650. The auction will be held for spectrum in various low (600MHz, 700MHz, 800MHz, 900MHz, 1800MHz, 2100MHz, 2300MHz), mid (3300MHz) and high (26GHz) frequency bands.