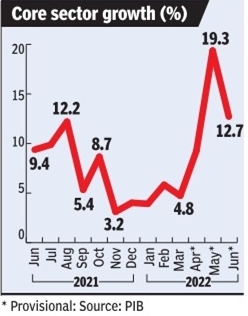 Core sector index expanded 12.7% in June, second straight month of double-digit growth, on the back of a sharp spike in petroleum refining, power and coal output. The numbers for June show that the eight core sector industries, which account for 40% of industrial output, grew at a slower pace than the 19.3% jump in May but faster than the pace of expansion a year ago . But at the dis-aggregated level the growth was not broadbased. Crude oil production saw a 1.7% decline in June, while natural gas and steel production saw a meagre growth of 1.2% and 3.3%, respectively.

What will provide relief to policymakers is the 31% jump in coal production given that the sector has been hit in recent months, as well as a 15.5% rise in power generation. With the onset of monsoon, however, coal production may be affected.