India’s high on population but low on development indicators 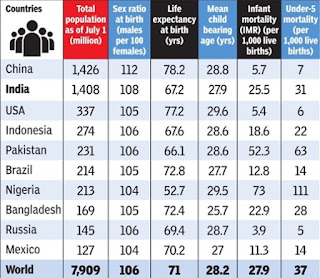 India is poised to overtake China as the world’s most populous nation, but it is third from the bottom on most development indicators among 10 most populous countries, with only Pakistan and Nigeria consistently below it. In fact, when it comes to sex ratio at birth, India is second from the bottom with just China recording a worse gender skew.

Bangladesh performs better than India on most parameters tracked by the UN’s World Population Prospects 2022, but is worse in one of them. Only one of the ten, the US, is a developed economy while four others — Russia, Brazil, Mexico and China — are categorised by the UN as upper middle-income. The rest are all in the lower middle-income bracket.

When it comes to the mean age of child bearing, Bangladesh has the lowest mean age among the ten countries. While India’s indicators are worse than the global record on most indicators, it has brought down its infant and under-5 mortality rates below the world average.

Lower life expectancy at birth is most often because of high infant and under-five mortality. However, in the case of countries like Indonesia, India and Russia, even at 15 years, life expectancy is just 54.4, 54.7 and 54.9 respectively. Similarly, a person who managed to reach 65 years of age can expect to live just 12.7 more years in India and just 12.1 m ore in Indonesia. These are the lowest barring Nigeria (11.1).

While differential income levels among the ten most populous countries could explain a lot of these patterns, the fact that Bangladesh with significantly lower per capita GDP based on purchasing power parity than India, $6,613 compared to India’s $7,333. 5, has done better on most parameters shows it’s not all just about how rich or poor a country is. Nigeria with the lowest per capita GDP based on PPP in this group, just $5,459.2 and Pakistan with $5,877.6 have the worst indices. Though Indonesia figures in the lower middle-income category, its per capita GDP based on PPP is $12,904.3, well above the others.