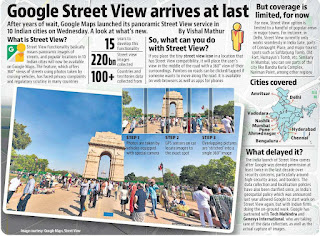 If you could take a “virtual walk” through New York’s famed Central Park sitting in Delhi earlier, now you can be in New York but stroll virtually in Delhi’s Lodhi Gardens as well, thanks to Google’s Street View.

Google launched the feature — already available in over 100 countries — across 10 cities in India, enabling users to get a 360-degree view of any iconic destination, restaurant or street. This comes after it announced plans to capture street-level images in 2011 but had to stop the process in 2016 after the government restricted it citing security issues. Google, which typically collects street-level images via cars and bikes fitted with cameras, is offering the service in partnership with Tech Mahindra and Genesys International.

The service has gone live in Bengaluru, Chennai, Delhi, Mumbai, Hyderabad, Pune, Nashik, Vadodara, Ahmednagar, and Amritsar. The feature, available under Google Maps, is expected to help real estate companies and travel firms as well as aid in better navigation for users.

According to India’s geospatial policy, released last year, geospatial data of a spatial accuracy that is below one metre horizontally and three metres vertically can be collected only by entities controlled by Indian citizens. “This is the first time in the world that Google Street View is being brought to life completely by local partners,” Miriam Daniel, VP-maps experiences, Google, “They (the partners) have covered 150,000 kilometres in India. We plan to expand this to 50 cities by the end of this year. ”

Meanwhile, the Indian rival to Google Maps, MapmyIndia has also launched its own 360-degree panoramic street view offering called Mappls RealView. The service will be available on the digital mapping firm’s consumer mapping portal Mappls on the web and Mappls App on Android and iOS.

“As an Indian company competing with a monopolistic big-tech foreign giant for the consumer market,” MapmyIndia’s aims to show how indigenous, home grown deep-tech companies are giving “advanced capabilities to users in the areas of maps,” CEO Rohan Verma said.