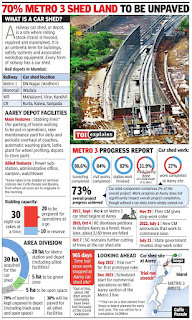 Work on the construction of a car shed at Aarey for the Metro 3 (Colaba-Bandra-Seepz) corridor commenced on Thursday, immediately after the Eknath Shinde-led state government issued a notification lifting the stop-work order imposed by his predecessor’s regime. Work at the site had come to a standstill in November 2019 after the then chief minister Uddhav Thackeray issued a stay on any kind of construction activity in Aarey. A decision to lift the stay was taken in the very first cabinet meeting of the Eknath Shinde-Devendra Fadnavis government.

A notification issued on Thursday by the state urban development department to relevant agencies involved in the project stated, “The Metro 3 corridor has been jointly executed by the central government and the state government. On March 17, 2022, the Union government’s housing and urban affairs ministry had issued directions to complete car shed/depot and other works related to the project at the earliest. ” Announcing the lifting of the stay, it stated, “It should be ensured that there is no disturbance to the ecosystem there. ”

Chief minister Eknath Shinde said, “Environmentalists should take into account the facts of the project before protesting. Delay in executing the project will lead to increases in cost. ” Deputy chief minister Devendra Fadnavis said, “The decision to vacate the stay has been taken in the interest of Mumbaikars who are dying each day due to overcrowding on trains. ” Fadnavis alleged that former CM Uddhav Thackeray decided to take the car shed to Kanjurmarg “only for his ego and not for the benefit of Mumbaikars”. “I respect the environmentalists but the motive is questionable if someone tries to stop work even after a Supreme Court verdict… We are going to stop carbon emissions of 2 lakh metric tons or more due to the Metro. Delaying Metro by one day means reducing the life of each and every Mumbaikar through pollution. ” Former environment minister Aaditya Thackeray claimed that a depot in Aarey will lead to flooding by Mithi river. To that, Fadnavis replied, “(He) may have been the environment minister, but it does not mean that he has done all the studies. If there is so much concern for Mithi flooding, what about encroachments and illegal constructions allowed by BMC along rivers?”