HDFC Bank to be among global top 10 after merger 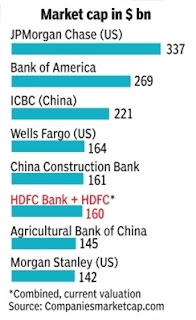 HDFC Bank will be among the world’s top 10 most valuable banks after its merger with parent HDFC at current valuations. It will also be the first Indian bank to make it to the top 10 club.

HDFC Bank has a market capitalisation of about $108 billion. It has recently edged past Citigroup (over $100.5 billion), which was at number 17. HDFC Bank is worth more than UBS and DBS Group (both valued at around $58 billion). The country’s largest lender SBI ($57 billion) is at number 32 ahead of BNP Paribas ($55 billion) in terms of valuation.

The combined market cap of HDFC Bank and HDFC ($52 billion) would be around $160 billion.

The Financial Stability Board, an international body which makes recommendations on financial regulation, had termed JP Morgan the most systemically important bank for 2021 followed by BNP Paribas, Citigroup and HSBC. The board publishes a list of 30 systemically important banks worldwide. While the 2021 list does not have any Indian bank, it has four Chinese lenders.

China currently has five banks in the top 10, which is the most for any country.