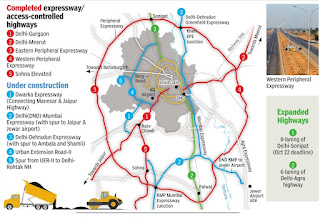 A web of expressways and access-controlled highways connecting Delhi with other major cities by the end of 2024 will make it one of the most well-connected national capitals in the world. Moreover, the interlinking of these high-speed corridors will ensure seamless connectivity for traffic coming from cities like Mumbai, Vadodara, Jaipur, Srinagar and Dehradun.

Highway ministry officials said six expressways and access-controlled highways — two completed and four under construction — will provide Delhi high speed connectivity. While the Eastern Peripheral Expressway and the Meerut Expressway have been completed, the remaining four — Delhi-Mumbai Expressway with connectivity with Jaipur and Jewar airport, Delhi-Amritsar-Katra, Delhi-Dehradun with a spur towards Ambala and the Urban Extension Road II — will be completed in 2024.

“The aim behind road connectivity is to ensure that people can reach or leave Delhi quickly and easily,” explained an official. “At present, it takes a long time to get out of the city because people need to take the clogged arterial roads due to the huge volume of local traffic. The new networks being developed will give multiple options to commuters to leave the city limits smoothly. ”

For example, once the Delhi-Dehradun Expressway is operational and the spur from Shamli to Ambala is completed, people can take the expressway from Akshardham to reach Ambala and Chandigarh. “This link will be 10-15km longer than the existing Delhi-Chandigarh highway, but people can save nearly two hours because they can drive at a higher speed,” said an official of National Highways Authority of India.

Similarly, the Delhi-Mumbai Expressway terminating at DND Flyway in Delhi will be connected with an elevated road till Akshardham. People coming from the cities in west India can take the Dehradun Expressway to reach Chandigarh and Srinagar. In fact, the existing seamless road network connectivity from Akshardham to Meerut and Yamuna Expressway will ensure high speed link to different parts of Uttar Pradesh, where several new expressways are being constructed.

According to the NHAI data, high speed road links measuring over 330km are being developed at an investment of Rs 50,000 crore and all these roads are directly linked with Delhi. While inaugurating the Pragati Maidan tunnel project, PM Narendra Modi had listed the expressways that were being built to improve connectivity with the capital and had said that with these networks Delhi would “be one of the best connected capitals across the globe” and would will “reduce the city’s urban burden”.

Union road transport and highways minister Nitin Gadkari has also said that providing multiple good road connectivity across Delhi-NCR will reduce the congestion and pollution burden on the capital. According to NHAI, the existing and upcoming highway links from Delhi will connect them to the new expressways in UP. And with the implementation of the toll collection through the automatic RFID-based FASTag system on the roads built by states governments, travel to and from the capital can only become smoother.