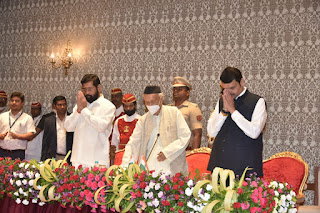 Eknath Shinde of the Shiv Sena was unexpectedly sworn in as chief minister of Maharashtra, with BJP support, after leading a rebellion against party leader and former chief minister Uddhav Thackeray. The frontrunner for the post, BJP leader Devendra Fadnavis, was sworn in as deputy chief minister after he initially announced that he would stay out of the government. It had been assumed that Fadnavis would return to the role, given that the BJP has more than 106 MLAs in the 288-member house, along with the support of 14 smaller parties.

Shinde rebelled with 39 Shiv Sena MLAs and independents, and had been in Guwahati for the past 10 days as his faction wanted Thackeray to quit the ousted Maha Vikas Aghadi coalition government. Thackeray resigned as chief minister on Wednesday after the Supreme Court refused to delay a confidence vote against his government.

Shinde and Fadnavis were the only two sworn in at a small ceremony at the Raj Bhavan on Thursday.

Fadnavis was not keen to be a part of the Shinde government but relented after the BJP leadership, including party chief JP Nadda, intervened.