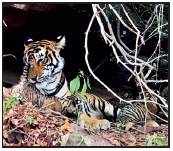 Tigress T-117 gave birth to two cubs in the Sarmathura forest range of Dholpur in an area developed for social forestry. This is the first incident in the state in which a tigress has given birth outside the protected area. The mother with two-month-old cubs were spotted near Richda village in an area known to be infested and 'preserved' by bandits.

“The tigress mated with T-115 and gave birth to the cubs. Teams have been deployed to conduct extensive monitoring in the area,” a senior forest official said.

This is the second birth of cubs recorded in Kailadevi and Dholpur region in the past one week. But the area surprisingly still does not come under the Critical Tiger Habitat category.

While the movement of tigers from the overpopulated Ranthambore Tiger Reserve to Kailadevi and nearby areas has been frequent, with several of them reportedly living at the sanctuary for several months, the recent birth of cubs has made the potential of sanctuary and adjoining areas evident as a haven for tigers.

The forest department should focus on this area spread over approximately 770 square kilometers, experts said. “There is rampant illegal mining in many regions, which is a major threat to existing big cats. But despite the presence of bandits, poaching has never been reported in the area,” a forest official said.