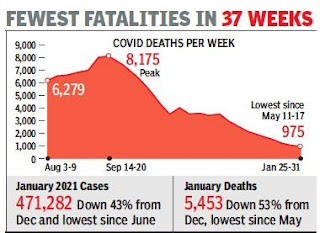 India’s weekly death toll from the Covid-19 pandemic fell below 1,000 for the first time since the first week of May last year, while fatalities recorded in January were the lowest in eight months and less than half of the toll reported in December.

Fresh cases of the virus too continued to move along a steep downhill path, with the count in January falling below 5 lakh at 4,71,282, the lowest monthly tally since June last year. There were 89,934 cases reported in the current week (January 25-31), down 6% from the previous seven days. Last week, India had recorded less than 1 lakh fresh cases for the first time since the June 15-21 week. Weekly cases are now less than 14% of the number recorded at the peak of the pandemic, when the tally had climbed to 6,45,014 in September 7-13.

While the case count has been falling steadily, there has been a steeper drop in deaths related to the pandemic. India recorded 975 Covid fatalities during the current week, the lowest in 37 weeks. This was also the first time since May 11-17 when less than 1,000 deaths were recorded during a Monday-to-Sunday week.

There were 5,453 recorded deaths from the virus in January, the lowest monthly toll since May last year, when 4,267 fatalities were reported. Deaths were down to less than half the number reported in December, when the toll stood at 11,427. The highest monthly toll was in September when 33,255 deaths were officially reported in the country. The toll in January was less than a sixth of that number.

Within the country, a major chunk of new cases are being reported from Kerala and Maharashtra, the two states that together account for two-thirds of all active cases in India. Of the 89,934 fresh cases detected in the current week, Kerala alone accounted for around 39,000 infections and Maharashtra more than 17,000. Together, the two states had a 63% share in new cases recorded in the week.