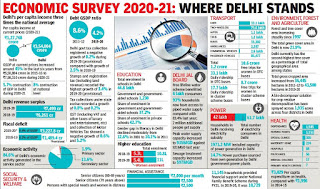 Hit by the Covid pandemic, Delhi’s per capita income has declined by Rs 22,217 and Gross State Domestic Product has shrunk by 5.7% during 2020-21. That contraction is, however, far less than the decline of 8% at the national level during the same period.

According to Delhi’s Economic Survey 2020-2021, tabled by deputy CM Manish Sisodia in the assembly on Monday, despite the decline in per capita income, the average Delhiite earns three times more than the average Indian. Delhi’s per capita income during 2020-21 at current prices has been worked out to be Rs 3,54,004 as against Rs 3,76,221 during 2019-20. Delhi’s GSDP had increased by around 45% in the past six years.

Sisodia said the GSDP contraction was relatively less “because the Delhi government took timely steps to revive the economy.”

Around 80% projects in education and health sectors are “on track”, according to the Outcome Budget 2020-21 presented in the assembly.

Hopes of a robust recovery in the services sector, consumption and investment have been rekindled now with the vaccination drive addressing the pandemic issue, according to the survey. In 2021-22, a sharp recovery of real GSDP of Delhi with double digit growth is expected based on a low base effect and inherent strengths of the economy.

As a general phenomenon observed in most of the urban economies, Delhi is also showing a trend of higher share in the services sector. This sector was a major revenue booster with a share of Gross State Value Added Tax at 82.8% in 2020-21, followed by the secondary sector at13.7% and the primary sector at 3.4%. The services sector also plays a pivotal role in employment generation.

In the financial year 2020-21, the education sector remained a priority sector with a maximum allocation of 23.8% (highest among all states) followed by transport (14.7%) and medical and public health (13.4%).