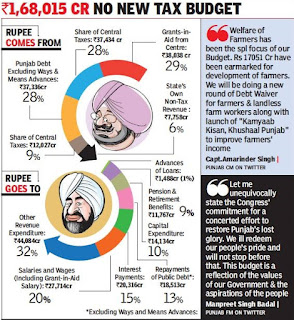 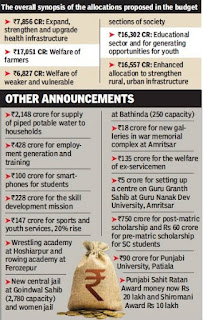 Opting for a slew of sops ahead of the Assembly polls due early next year, Punjab finance minister Manpreet Singh Badal on Monday presented a tax-free budget for the financial year 2021-22 while promising to implement the 6th Punjab Pay Commission, continue with crop loan waiver, fill up job vacancies and hike benefits under various welfare schemes.

The last budget of the incumbent Congress government – with an outlay of Rs 1,68,015 crore – was unveiled by Manpreet in the state assembly on Monday afternoon. He proposed to implement the 6th Pay Commission from July1, besides free travel for women and students in government-run buses, an increase in old-age pension from Rs 750 to Rs 1,500, hike in allocation under the Aashirwad scheme from Rs 21,000 to Rs 51,000 and increase freedom fighter pension from Rs 7,500 to Rs 9,400. The budget also announced 48,989 posts in the government departments to be filled in the first phase, against1 lakh vacancies.

Hoping to receive the ‘much awaited’ report of the 6th Punjab Pay Commission soon, the finance minister said he had made necessary provisions in the budgetary estimates. “I also announce to pay the arrears, if any, in a staggered manner of which the first instalment will be paid in October 2021 and second instalment in January 2022. An allocation of Rs 9,000 crore is being made,” he said.

Justifying the new schemes despite a fiscal deficit of Rs 24, 240 crores for 2021-22, Badal said, “The value-added tax has gone up in the last two quarters. GSDP too went up for three years, except for the Covid period, stamp duty went up by 41% and excise duty registered a hike of 52%. The total revenue receipts have gone up by 98.52% after Congress took over. The decision to reduce the retirement age from 60 years to 58 years too accrued us benefits. Meanwhile, GST projections cannot be altered, if it dips the Centre will compensate.”

Claiming that the ‘state was on a fiscal correction path..’, a line he borrowed from the report of the CAG laid before the House, Manpreet said, “We have successfully overcome the budgetary deficits, falling financial indicators, and economic woes.” The budget will have July1 as the effective date of implementation for the various welfare schemes, said Manpreet, citing the dent to the economy caused by the Covid pandemic.

Considering the ongoing farmers’ agitation, the budget also caters to the farming community with the government announcing a loan waiver of Rs 1,186 crore of 1.13 lakh farmers and Rs 526 crore of landless farmworkers in the next phase, under the crop loan waiver scheme in 2021-22. The budget also earmarked Rs 7,180 crore for free power subsidy for farmers.

Dedicating the budget to the farmers of the country, Manpreet said, “I salute their inspirational struggle that is already on its way to acquiring legendary status. For six months now, the entire world has been shocked by the audacity and rigidity of the Centre in passing the three farm bills. Farmers protested in Punjab, but the Union government did not listen. They moved to Delhi, but the Union government still did not listen. Today, the entire world is echoing the voice of the Indian farmer.”

Out of the total expenditure, interest payments alone will take away 17 %, pension and retirement benefits will cost 10%, power subsidy needs 9%, besides salaries and wages (24%), other revenue expenditure (25%) and devolution of local bodies (3%).

For the agriculture sector, a new umbrella program ‘Kamyaab Kisan Khushaal Punjab’ will be launched during 2021-22, with an outlay of Rs 3,780 crore to be implemented during the next three years.

The FM said the allocations for key sectors had gone up this time – 85% more for medical education over last year in view of Covid crisis, increase of 40% for water resources, hike of 52% for welfare schemes and 68% more for urban infrastructure.

Manpreet also claimed that the state has not seen double overdraft in these four years. During the current fiscal year, despite the drastic impacts of lockdown on account of the Covid-19 pandemic, the state met all its commitments without witnessing the overdraft for even a single day. Supplementing this, the state has started investing in the Consolidated Sinking Fund to pre-emptively mitigate the rollover risk or reinvestment risk and Rs. 1,168 crore has been invested in Consolidated Sinking Fund up to February 2021, he said.

Aam Aadmi Party MLAs began protesting and later staged a walkout when references to the outstanding debt were made by the finance minister in his speech.