Karnataka gets a no-tax vax shot 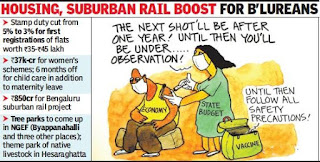 Among the best news from chief minister BS Yediyurappa’s budget for 2021-22 presented on Monday is that Karnataka did considerably better than the national growth average in the pandemic year, and that there are no fresh levies on citizens.

While India’s GDP in this fiscal is expected to drop by about 8%, Karnataka’s has fallen by just 2.6%. This was partly because agriculture grew by a good 6.4%, and services, which dominates the state economy, fell by just 3.1%, a reflection of the strength of the technology business even through the lockdowns.

The budget, as Yediyurappa said, was constrained by the troubles following the pandemic. The collapse in revenue forced the government to increase its borrowings in 2020-21 by 40%, compared to that in the previous year. The borrowings are budgeted to increase a little more in the coming year, resulting in burgeoning interest payments. A state that has seen revenue surpluses for years witnessed a massive revenue deficit in 2020-21, which is expected to continue in the coming year. Many economists see such deficits as necessary to deal with the current growth challenges.

“The budget 2021-22, perhaps for the first time in Karnataka history, has seen no increase in taxes...We wanted to ensure that in such difficult times people are not burdened. We have ensured parity in regional and community development within our budgetary constraints,” Yediyurappa said.

Since the budget was presented on Women’s Day, there were several mentions of schemes for women, notably one that provides child care leave of six months – in addition to the existing maternity leave – for women employees in the state government.

Major changes have been made in capital expenditures – which create assets – following the pandemic. It went up, as expected, sharply for medical and public health in 2020-21, but the same has been halved for 2021-22. Major expenditures like those for water supply & sanitation, for welfare of SCs, STs, OBCs & minorities, and for roads were cut sharply in 2020-21, compared to the estimates in last year’s budget – in order to make up for the increase in expenditure for medical and public health, and the decline in revenue.

While the expenditure for roads has largely been restored in the new budget, those for water supply and welfare remain at the lower levels. However, expenditure on urban development and medium irrigation has seen good increases in this budget.

Total capital expenditure is budgeted to be up 11% compared to the revised lower estimate for 2020-21. This sounds good, provided the money is spent, and is spent well.

Nothing major or new is proposed for Bengaluru. Public policy researcher Pavan Srinath said it’s disappointing that there is no mention about how previous plans are progressing. But he said he likes the efforts being made to put to good use unutilised public land.

“There’s so much dead land owned by the state government, its departments and PSUs. It’s good to see the move to convert Mysore Lamps Works land in Malleswaram to an Experience Bengaluru centre, and the conversion of the NGEF land in Byappanahalli to a public mini forest. Rather than auction off public land for commercial / residential use, their conversion into genuine new public spaces of all kinds – from gardens to forests to museums to libraries to anything else – is very welcome,” he said.