Maharashtra Budget: Liquor to Cost More, Healthcare Gets a Boost 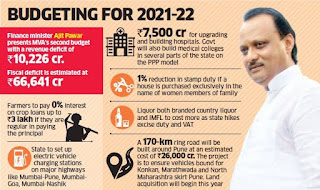 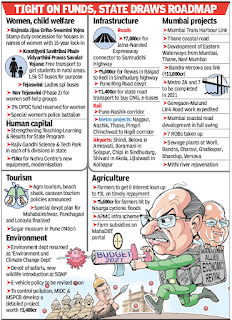 The pandemic had its imprint in the budget as the state government has earmarked ₹7,500 crore for building and upgrading hospitals, primary health centres in several parts of the state. Pawar has proposed to also increase spending on infrastructure and education, and announced soaps for farmers and women. Liquor, especially branded country liquor, will cost more, as the budget hiked the tax to bring more revenue to the exchequer.

As several of the projects would be funded through loans, and due to its stressed finances amid the pandemic, the state’s estimated debt stock for 2021-2022 is pegged at ₹6.15 lakh crore, up from the ₹5.38 lakh crore in FY21.

Pawar said the learnings from the pandemic had led the government to spend more on healthcare. “We had not made as much investments in the health sector earlier, because no one saw such a pandemic occurring. Hence, we have now decided to focus on the health sector,” Pawar told reporters after presenting the budget.

The budget offered a 1% rebate on stamp duty to women purchasing a new home.

For farmers, Pawar said for those who take a crop loan up to Rs 3 lakh and repay on time, the entire interest would be paid by the state government. If farmers pay 50% of their electricity bill arrears by March 2022, then the state would waive the remaining half. He also proposed an outlay of ₹12,951 crore for the irrigation department.

The government has proposed to spend ₹25,000 crore to build a ring road in Pune. The land acquisition for the project will happen this year.

The state has decided to set up a financial development corporation under the Public Works Department to raise funds for the maintenance of roads. In 2021-22, the state envisages spending ₹5,000 crore to build roads and loans would be taken to fund this.

A medium-high-speed railway line of 235 km would be built between Pune and Nashik, where trains would travel at 200 km per hour, the minister said. The expected cost of the project is ₹16,039 crore.

In collaboration with the World Bank, the state would launch the Strengthen Teaching, Learning and Results of State Education System scheme to provide quality education for students up to the 8th standard. The estimated cost of the project is ₹ 976.39 crore. The state also proposes to spend ₹3,000 crore for the renovation and repair of dilapidated government zilla parishad school buildings. An outlay of ₹2,461 crore has been proposed for a Maharashtra International Sports University in Pune.

The state government has also decided to set up a Rajiv Gandhi Science and Technology Park’ in each revenue district. The state has also proposed ₹400 crore for a memorial in Dadar for the late Shiv Sena Supremo Bal Thackeray.

The minister announced free travel for girl students in rural areas to schools and colleges on state transport buses. The state decided to set up a school in every district under the CBSE curriculum for the scheduled caste and neo-Buddhist students. A seed capital scheme was proposed for transgenders to impart them skills for employment.

The Maharashtra government was widely expected to reduce the state’s taxes on fuel, however the minister announced no such sops. “We wanted to do a lot, however our hands were tied. Due to the Covid pandemic, we are facing a shortage of revenue. It is the Centre that should be bringing down the prices and not us. We need to have some fiscal discipline,” he said.

The state has decided to raise revenue by taxing liquor more. It has decided to classify country liquor into two separate categories as branded and non-branded. The budget proposed to increase the state excise duty to 220% of manufacturing cost or ₹187 per proof litre, whichever is higher, on branded country liquor. The government is estimated to get additional revenue of ₹800 crore from this move.

The total debt stock as a percentage of the state GDP has gone to an all-time high of 20.6%.

The BJP has called the budget a failure and questioned as to why the government did not bring down the prices of fuel in the state.