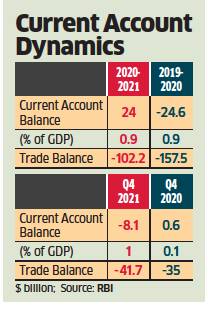 India’s current account ended in a surplus last fiscal year for the first time in 17 years, led by shrinkage in demand for imported items through the pandemic, although the last quarter ended in a deficit after mobility curbs were withdrawn in phases.

The current account balance — comprising the net of India’s export of goods and services — recorded a surplus of 0.9% of GDP in FY21 as against a deficit of 0.9% in FY20, central bank data showed. The last time the current account ended in a surplus for a whole fiscal was in 2003-04 when the surplus touched 2.3% of GDP.

Overall, the balance of payments ended in a surplus of $87 billion during the year on strong capital flows, with a bulk of the flows through foreign direct investment and portfolio flows.

The current account has been supported by a sharper narrowing of merchandise trade deficit than invisibles comprising services, transfers, investment and travel receipts and payments that slowed down.Net invisible receipts were lower in FY21 due to increases in net outgo of overseas investment income payments and lower net private transfer receipts, even though net services receipts were higher than a year ago, RBI said.

But the current account ended in a deficit of $8.1 billion in Q4, against a surplus of $600 million in Q4 of last fiscal.

“Normalisation in import demand as well as a surge in gold imports contributed to the widening of the current account deficit in Q4'2021 in spite of the massive increase in exports in March 2021,” said Aditi Nayar, chief economist, Icra.

The current account deficit is expected to widen in coming quarters as India slowly lifts lockdown restrictions and economic activity picks up.

“With activity continuing to normalise and commodity prices inching higher, the current account deficit is likely to widen in the coming quarters, in our view,” said Rahul Bajoria, chief India economist, Barclays Capital.

India’s external debt for FY21 rose 2.1% to $570 billion, largely on account of an increase in government debt and NRI deposits